My body has decided to stage a revolt. It has had enough of what I have been putting it through and has decided that enough is enough. I went into hospital on Tuesday morning feeling pretty crap because Pan and I had broken up the night before and were just generally feeling under the weather.

As I was sitting in the waiting room my breakfast decided that it didn't like my stomach so up it comes. It turns out that my entire digestive tract has had become inflamed and irritated so it's going to come out one way or another and hurt like no tomorrow doing it.

So I have had to put off doing chemo this week as my body is having to heal itself which involves me drinking some foul concoction three times a day, having salt baths and more random doctorish things that I love so much.

So yay for this week and being not so healthy.
Posted by Harriet at 01:43 No comments:

What We Dream About

I found this photo while I was doing my nightly hunting on the internet and as you sometimes do you feel a connection with a photo or phrase and this one happened to catch mine and I wondered why. 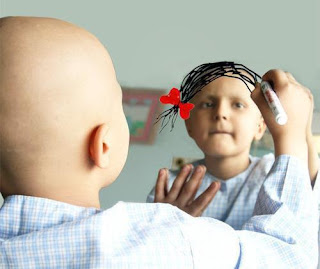 I think it's because I seem to spend all of my time in hospital and all I want to do is go back to the time when life was easy, carefree. It's true, I may have partyed too much but the way I figure it is life is precious and I had no intention of wasting it.
I want to do so much but I physically can't. I can't even walk THREE HUNDRED metres without feeling like I have walked a marathon. It's so hard because I have been doing this for so long and I just cannot wait for it to be over.
I dream of the days when I can be like everyone else. When my parents yell at me for spending too much money or my brother gets pissed off because I keep on trying to offload my jobs onto me, where I am not a burden on my family.
They are amazing and never complain but I know it's soo hard on them because this has taken over their lives. It's not that I don't appreciate it because I do but I just wish that this had never happened to them. They are very good people.
It just show's how quickly life can change.
Posted by Harriet at 02:41 1 comment:

I had the cutest wee visitor yesterday. I managed to get out of hospital late saturday afternoon and managed to spend a lovely Sunday and Monday catching up with a few close friends and my adorable new one. Her name is Penny and she is 10 weeks old!! She was so cute I thought I would share!! 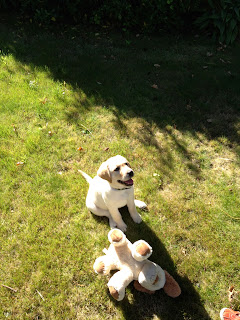 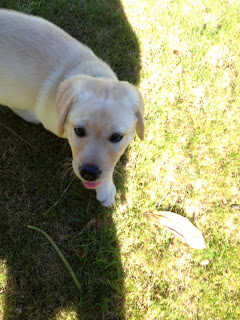 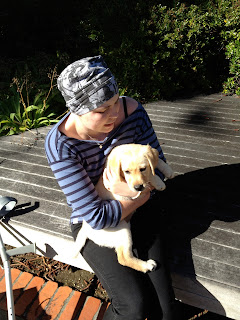 I have now been in bed for so long I have officially got bed sores!! The past three weeks have been rather rotten. I ended up having to have my Hickman line replaced not last Thursday but the Thursday before. The other one ended up having a rip in it. Who knows how that happened!!!

On the Friday (yes the very next day!) I started chemo but one little thing was different from usual. They forgot to give me the aprepitant and steroids so as soon as the chemo started so did the vomiting. I threw up every pill and was vomiting for about 2 hours until they managed to get it under control. That, in conjunction with just having a general anesthetic and the general fact I was having Cisplatin I was left feeling rather rotten.

I managed to get out of hospital on the Monday, only to have to go back in on the Wednesday because of a temperature. Luckily I was not neutropenic this time and was sent home with antibiotics. I was still feeling quite rotten all week. We had our lovely friends come up from Christchurch for the weekend and it was absolutely amazing to see them, I wish I had been better but I guess that's not how life goes. On Sunday I ended up having to come back into hospital and I was much sicker.

I had developed severe mucositis which meant I could not really eat or drink anything because my throat was so raw which left me feeling miserable but to top it off my immune system had decided it had enough and i was neutropenic again. Also my red blood cell levels were very low so I had to have two blood transfusions. My platelets were low too so I had to have two platelet transfusions.

I also had low magnesium and potassium. Also on the Monday I got a migrane so that left me throwing up and feeling generally awful. I am finally feeling better and hopefully will be leaving hospital tomorrow.

Let's hope the sun will shine tomorrow.
Posted by Harriet at 02:09 No comments: